This page shows you how to make a simple but effective'Slim Jim' antenna. What we must understand before making Slim Jim' antenna is the calculation formula and relationship between antenna length and frequency.

Is the frequency and the length of the antenna：

The choke balun, consists of around 9 close turns of the coaxial cable around a 40mm former (pvc pipe etc), or taped up and hung freely. As with any balanced feed antenna, this will prevent the braid of the coaxial cable from radiating, and becoming part of the antenna, and therefore affecting SWR and performance. The 9 turns is tested as correct for VHF operation (145MHz) More may be needed lower down in frequency.

The spacing between elements, I have shown as 45mm on 2 metres. This is not critical. It will have some effect on where the 50Ω feed point is, but im sure you'll find it! 'D' and 'F' work together in the calculations above. If you are using something with spacing thinner than 'F' suggests, then 'D' will be further up the antenna, and vice-versa.

I made one for 4m (70MHz) which is 3 metres long! The quarter wave matching section can be made horizontal, with the half wave radiator section vertical, 90° to it if space is an issue. Just remember the whole antenna needs to be in the clear, away from any objects, especially conductive objects!

So, how does this thing work?

The slim jim, similar to the J-pole, is infact a half wave end fed dipole, in the slim jims case, an end fed folded dipole. As with all folded dipoles, the currents in each leg are in phase, whereas in the matching stub they in phase opposition, so little or no radiation occurs from the matching section. You may think how can you say this is a dipole, when its just one element? Well, contrary to popular belief, the dipole is so named because it has two electrical poles, not two physical poles. Wouldn't that be a di-element!? Just like a magnet has two magnetic poles, a North and a South, we have two electrical poles, a Positive and a Negative. Being a half wave, there is always two opposite poles on the tips at each half cycle. Any half wave antenna is actually a dipole.

To help explain this, I have drawn on the left, what happens to the voltage on a half wave element during one cycle. You can see, there are 2 poles, one positive and one negative at each half cycle. Hence, 'dipole'. As its a half wave element, the wave is opposite at each end. Unlike the full wave example on the right, where the wave will join up if you imagine placing it on top of itself.

Hopefully, this explains things, and shows that the slim jim is actually a half wave dipole. A dipole, is usually fed from the centre, where the impedance is about 68Ω. This provides a reasonable match to 50Ω coaxial cable, and is why the centre fed dipole is so widely used. A dipole can be fed anywhere along its radiator, for example, the windom is 'off centre' fed at the 200Ω point, and an end fed half wave will give a high impedance of around 450Ω or more.

So, we are feeding this half wave antenna from a high impedance point, which needs to be matched to 50Ω coaxial cable, and is where the 'J Integrated Matching' (JIM) quarter wave matching section (λ/4) comes in. With the slim jim, you have the option to select the exact impedance you want, typically 50Ω. With the centre fed dipole, you have an impedance of around 68Ω, and usually the antenna is slightly detuned, to bring it down to 50Ω. The matching section is just that, and does not radiate significantly. Radiation starts from the beginning of the half wave section, to the tip of the antenna, so although the whole antenna is 3/4λ long, it is just a half wave radiator. The matching section does radiate a very small amount, due to the impedance's at the top of the matching sections being not identical. This is because one is open (where the gap is) and the other is the feed for the radiating section. This means the two waves dont completley phase eachother out, and therefore some small radiation will occour. This is no significant problem, they are both high impedance, high voltage, low current points.

The 50Ω point can be found once you have built the antenna to the correct dimensions. Have the antenna out in the open, then move the feedpoint up and down small amounts, and when a 1:1 SWR is found, fix them there. An example of what the different impedance points may look like are shown on the image to the left. The calculator above will give you a good starting point, although spacing between the elements will have an effect on where this actually is.

Although the antenna is a half wave end fed, it will perform better than a half wave ground plane, due to its lower angle of radiation. 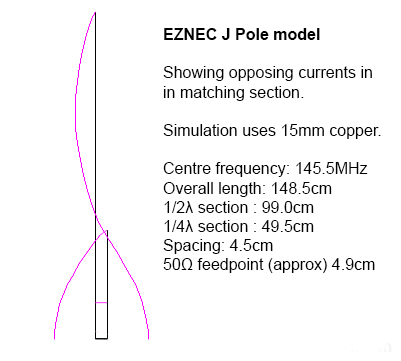 I hope this has been of help to you. If you decide to build this antenna, i'd like to know what you think of it. Leave a message on the guestbook, or email me. Thanks!

<< HAVE FUN DESIGN YOUR OWN J POLE FOR ANY BAND!Domestic class amateur radio station DIY kit >>